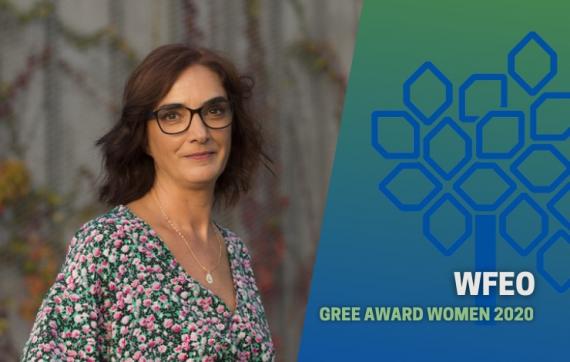 Professor Elvira Fortunato, Director of CENIMAT|i3N, was awarded today with the WFEO GREE Award Women 2020, the largest international award in Engineering, designed to distinguish the work developed by women engineers around the world.

"This is the largest international award in engineering, which distinguishes the work developed by female engineers around the world," said the President of the Republic, Marcelo Rebelo de Sousa, in a statement published on the Presidency website.

The application, presented by the Portuguese Order of Engineers (OE), and which had as its protagonist the Portuguese researcher, who is also a member of this professional association, was the winner among more than two dozen applications submitted worldwide.

In the submitted application, the OE, member of the World Federation of Engineering Organizations (WFEO), underlined the "revolutionary character" of the scientific solutions developed by the Portuguese engineer in the area of materials and transparent electronics, with the production of the first thin-film oxide transistors, using sustainable materials, fully processed at room temperature.

For Carlos Mineiro Aires, Chairman of the OE, this award "is a pride for Portugal and for all the Portuguese".

"This award reflects the excellence of Portuguese engineering and science, as well as its diversity. It is proof that technical competence, talent and innovation have no gender or geographical limitations, and that in Portugal there are top professionals who compete and are at the level of the best in the world," he said in a statement.

Mineiro Aires also highlights "the recognition of the unique technical and scientific path of engineer Elvira Fortunato, making her an inspiration for the technical-scientific community worldwide, especially for young people and women who aspire to embrace and progress in engineering and science in general".

The Award Ceremony that will take place on 8 April, at 1 PM CET / GMT+1 through Zoom, in presence of the jury members, WFEO and UNESCO officers, representative of GREE Electric Appliances, donor of the Award, as well as of the four highly commended nominees which the Awards Committee has selected in addition to the Award Laureate.

This month, the Portuguese researcher had already been distinguished with the Pessoa Prize, which then highlighted her "outstanding contribution to scientific, technological and innovation development".

WFEO is part of the main engineering associations at international level, represents more than 30 million engineers from 100 countries, is a member of the main group of the scientific and technological community of the United Nations and is associated with UNESCO.